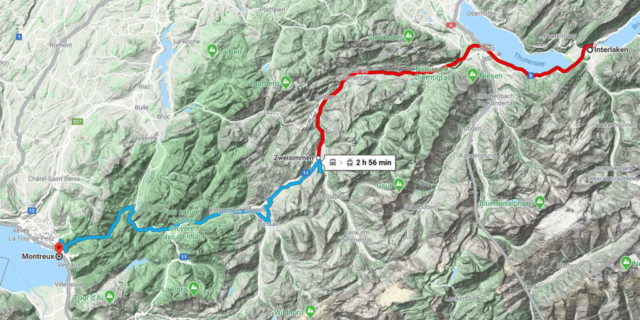 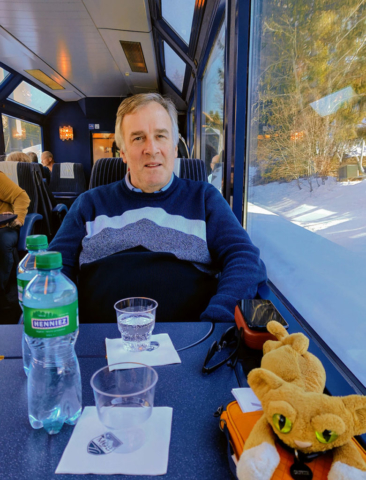 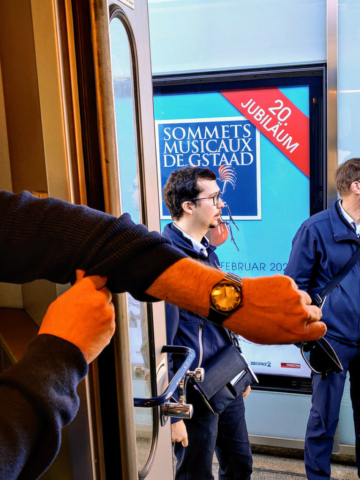 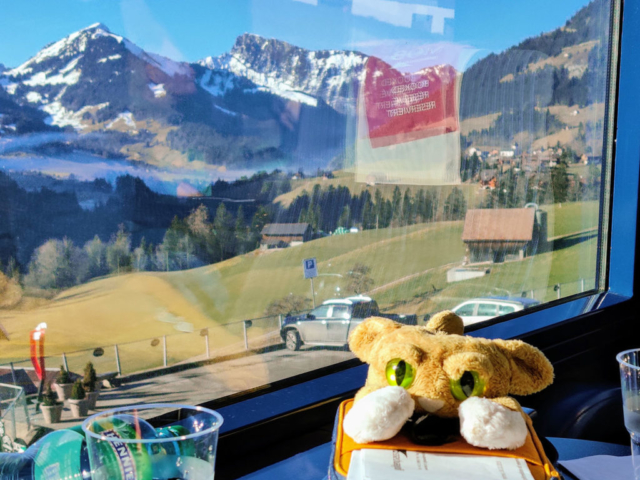 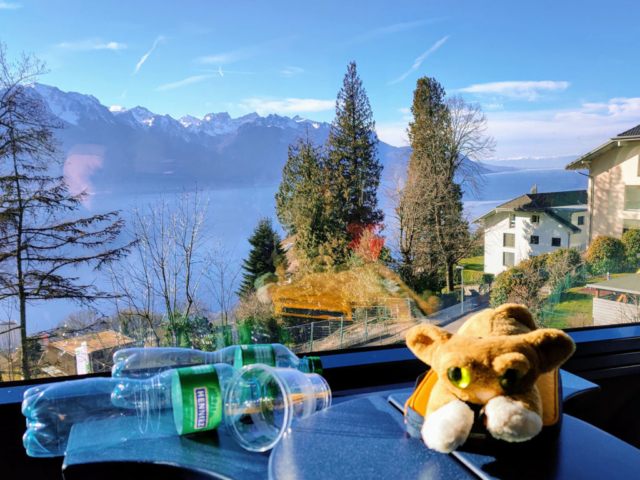 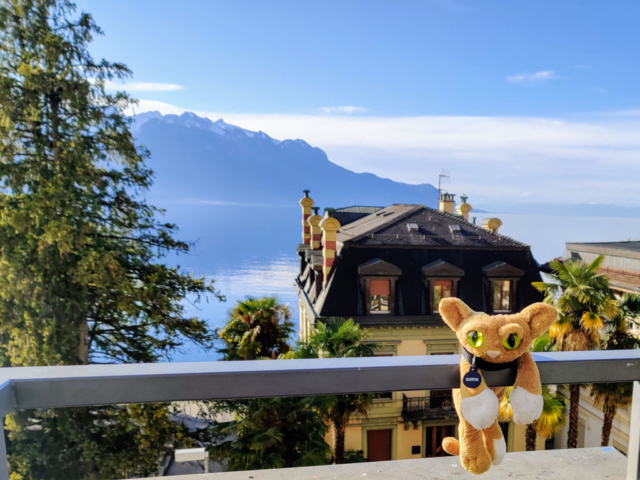 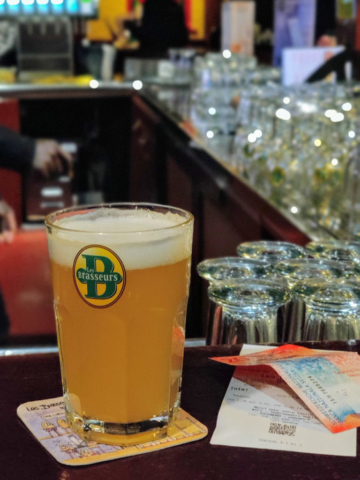 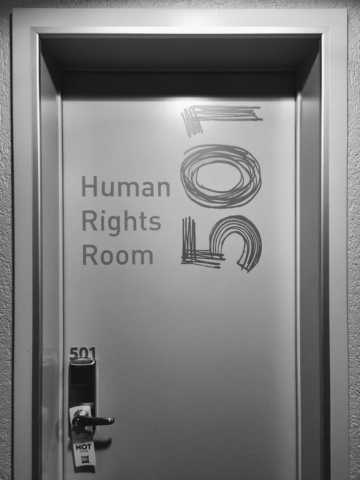 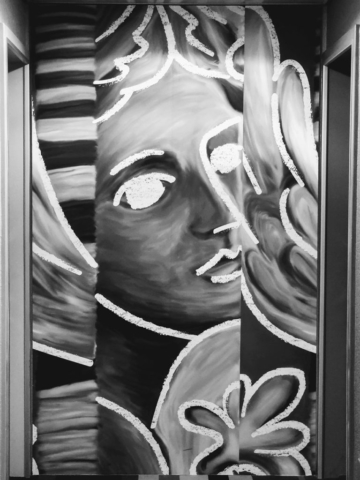 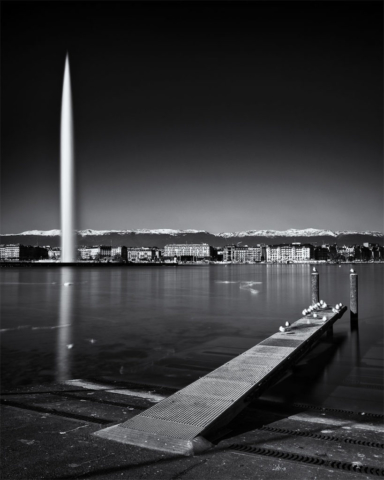 The most spectacular day

In theory, you can do the Golden Pass Line in a single day. In practice, it would be a shame to do it in less than two, and extending it out to three to allow ourselves the Bond silliness at Piz Gloria made it even better. After all, we had all the time in the world.

The first segment past Interlaken is on a fairly conventional train that makes its way west to Spiez, then up the Simme River valley to Zweisimmen. This section is nice and offers wonderful views of the Thunersee until you head up the valley.

In Zweisimmen there is a 5-minute train change to a narrow-gauge cog-enabled train with panoramic cars. This will go away sometime in 2021 as the company that operates the final segment is upgrading to trains that can run on both narrow and standard gauge rails. This will allow a single train to operate all the way from Interlaken to Montreux without a change and in theory I suppose could go all the way to Lucerne or even Zurich making for a one-day, one-train experience.

Jon and I had reserved seats together and settled in for the ride. This final panoramic train has onboard service and the server approached us for our order before we even left the station.

Jon’s face lit up as soon as the guy spoke. He was speaking French. We had crossed the line and were now in a place where Jon was completely conversant and at ease. It was still early so we passed on the wine and settled in with two bottles of sparkling water.

The train heads up through the mountains, across a pass and then down into the ski region around Gstaad. If the ski conditions around Interlaken were bad, well, here they were nonexistent. I imagine that if you took the cable cars to the very top you’d find something but the valleys were still green and lush. We really had to look for the snow.

Jon discovered that his watch does tell time in Gstaad. (You either get this reference or not.)

Griffith the very spoiled Traveling Mountain Lion decided he loves this trip and thinks we can skip all the “adventure” going forward. He wants to know why we don’t have panoramic mountain trains, and castles with first class service with outdoor cafes that give out fuzzy blankets and puffy coats to everybody? And people speaking French? And chocolate stores everywhere? Why can’t we, or at least he, have all these things always? Why not?

I think my real cats’ attitude has rubbed off on Griffith.

Emerging at the lake

We emerged in Montreux at the main station near the lake. The final section of the journey is through a series of tunnels and hairpins with amazing views of the lake from the hilly outskirts of the city. By the time we arrived it was mid-day and we were hungry.

Our bags got stuffed into a locker in the train station and we set out to look for food. It didn’t take long, a cafe across from the station with a view of the lake was perfect. Jon took over speaking French. He ordered pizza and beer. It was the best meal we had since arriving in Switzerland and put us both in a good mood.

There’s an express train every half hour to Geneva on the main rail network. Since it’s mainline rail rather than the mountain trains it’s relatively inexpensive too. We explored the waterfront in perfect weather, stopped by the statue of Freddie Mercury (why does everyplace try to tie itself to celebrities whose connection was minimal at best?) and looped back through town to the station.

An hour and fifteen minutes later we were in Geneva, and 10 minutes after that we had walked over to our hotel not far from the station. A nice place clearly targeting to youthful travelers on a budget but clean, quiet and comfortable.

Beer at a place recommended from work, then dinner with a very old dear friend. Jon went out and met his friend as well.

We’ll have a day to explore Geneva and see friends again, then on to family in Tel-Aviv. This adventure is done for now.