James Bond silliness and the “Top of Europe” 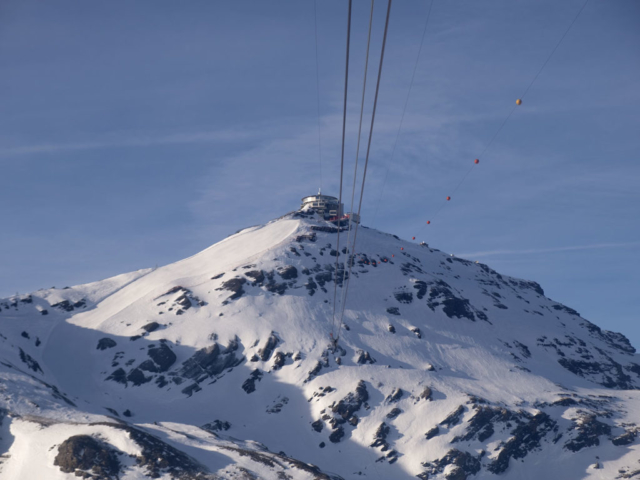 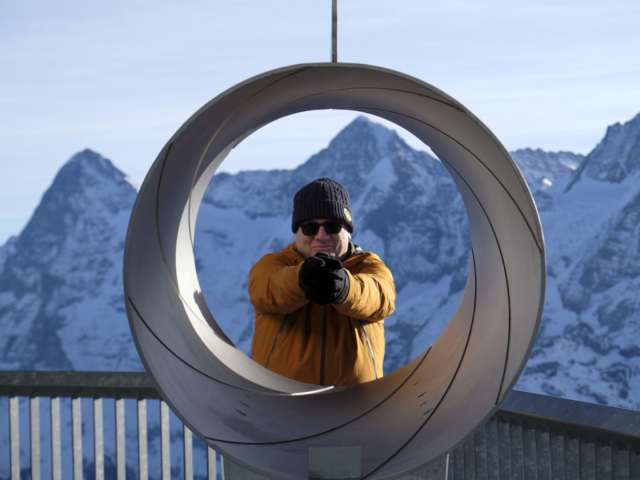 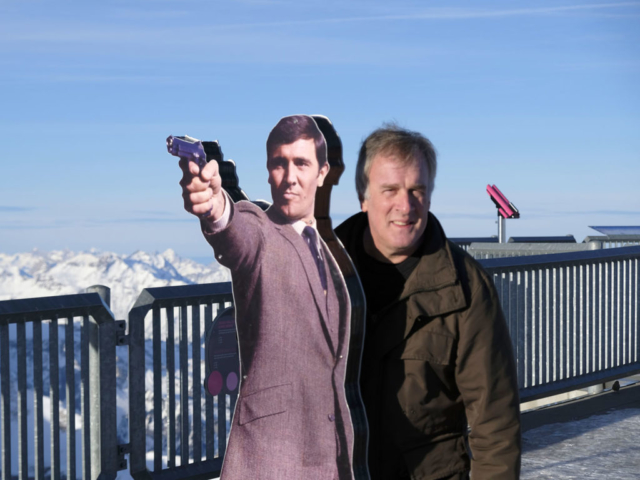 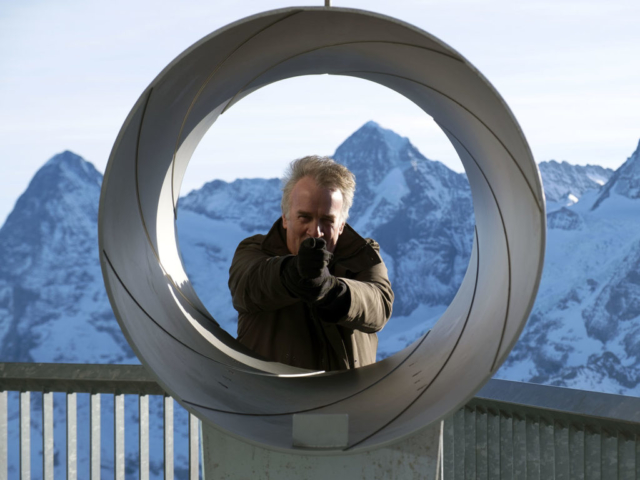 We took an early morning train from Interlaken up to Lauterbrunnen, a small town at the very edge of the Jungfrau region. A few weeks ago it would have been full of holiday tourists and in a few more weeks the skiers will arrive. Right now, it’s still a bit early for good snow and the holidays are past, so things are empty.

The train and the segments that followed were mostly occupied by a jovial bunch of Australian ski tourists who were not fazed by what was obvious to me as “not enough fresh snow.”

From Lauterbrunnen a bus takes you to the first of four cable cars that eventually arrive at the Schilthorn, or as it is more colloquially known “Piz Gloria” the name given to it by the producers of the original “On Her Majesty’s Secret Service.” The 50th anniversary of the film was celebrated last year and naturally there was quite a bit of Bond-mania still evident. Today the location would almost certainly be used only for a handful of exterior shots with the rest created in a studio, but 50 years ago, quite a bit of interior was shot on location as well.

There isn’t much else to see up there, so I had a horrible and horribly expensive cup of hot chocolate, and we caught the next car down.

Back a different way

We returned the way we came for the top two cable car segments. We had the cars to ourselves as all the skiers who had accompanied us on the way up were heading down on the snow. At the village of Murren we got off.

Murren is one of those picturesque little villages perched high on the edge of a cliff and accessible only by cable cars much of the year. Presumably there are roads because there is construction equipment and a number of utility vehicles up here, but other than commercial needs, cars are banned. We walked to the other end of the town where a short single-line, two-car train transports you north along the upper valley wall to the top station of yet another cable car. This one returns directly to the Lauterbrunnen train station where we started.

We found a coffee shop with pre-made sandwiches. It was our best meal in a couple of days. We had a light lunch and tried to decide what to do next. We had not anticipated that we would be finished quite so quickly and there was time to kill. Shopping for watches in Interlaken seemed like an uninteresting prospect. Many other tourist attractions are closed this time of year.

Up to the “Top of Europe”

I made the command decision to head up before we headed back down.

The other thing to do here if you’re not skiing is to take the cog wheel train up to the top of the Junfrau, through a long tunnel blasted in the mountains. We bought the round trip ticket from Lauterbrunnen and took the next train to Kleine Scheidegg, where the Clint Eastwood film “The Eiger Sanction” was filmed, and where the Jungfrau train begins its journey.

Along the way we passed through Wengen and saw them prepping for the downhill race that will take place in a week. The snow on this side of the valley seems a bit better at higher elevations and they clearly have some snowmaking going on as well. Also, they are supposed to get snow over the coming weekend. Jon and I are happy to have good weather, but the ski conditions are really due for snow.

Years ago, I had been up this way and it’s changed a lot. The ski towns have grown bigger and there are now lifts all the way up to the Junfrau train tunnel entrance. In the past, skiers wanting to come up this way had to use the train and it was included in their ski pass costs. Today the trains up from Lauterrbrunnen and Grildelwald to Kleine Scheidegg seem to be mostly a relic that serve almost exclusively as an expensive tourist trap. Not that the upper segment to a peak surrounded by glaciers was ever really anything else, but the lower segments used to have a much greater purpose than they do today, with high-speed chairlifts and gondolas offering a much quicker and easier solution for skiers wanting to get to the upper sections of the mountain.

Junfraujoch station has gone full tourist-trap since my last visit many years ago, with all sorts of underground constructions and attractions dug into the rock beneath the peak observatory. There’s a snow park outside on a flat section of glacier that is open when conditions permit, and they hold a variety of celebrity events there in the summer. There are ice caves. There’s an exhibit and a surround theater in case you are up there on a day when the visibility is less than perfect. And yes, there is a watch store, the highest watch store in the world, or so they say. Because surely the reason you just spent $160 on a train ticket to nowhere is so you could buy a fucking watch at the “Top of Europe.”

Also, it isn’t really the top of Europe, or even the highest accessible spot in Europe. (That would be the upper cable-car station on the Aiguille du Midi near Chamonix in France.)

Kind of hard to blame the operator for doing what they need to in order to justify the cost of operating things. I don’t think the ski traffic really uses all these trains as much as they used to, so something has to replace the skiers or the whole enterprise shuts down. Large tour groups and celebrity events to attract them seem to be what places like this can survive on.

With not even any James Bond silliness to amuse ourselves, we bypassed the ice caves tour and headed back down. Rather than hang out and get a bite to eat at one of the two train changes on the way down, we made pretty direct connections down to Interlaken and walked back to the hotel for a bit of a rest before dinner.

For dinner, we found an Italian place that was quite good.

Tomorrow should be the most spectacular day of the trip and the weather is supposed to be perfect.