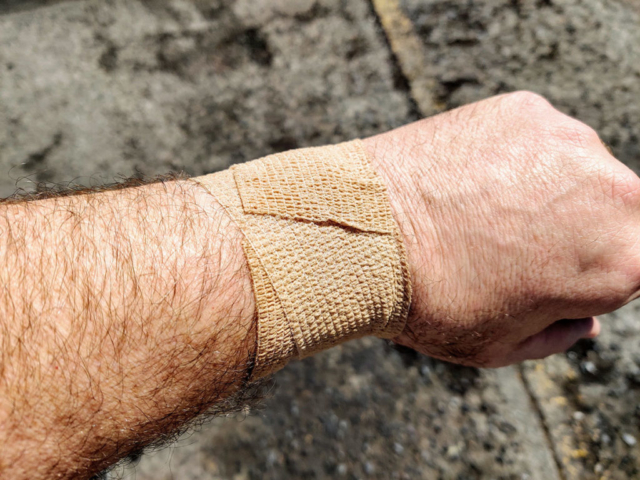 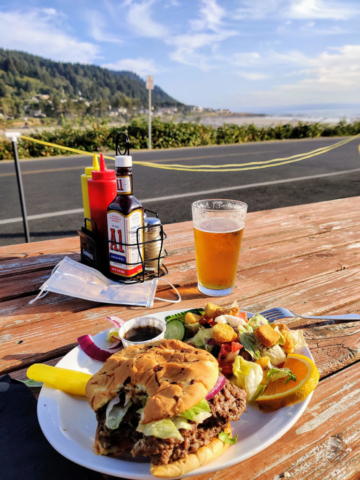 Got on the road mid-morning after realizing that I wasn’t going to find a place for breakfast on a Sunday that didn’t have a long wait. One of the downsides of travel during a pandemic is the lack of options, and limited seating in the places that offer options. Things seem a bit tighter in Oregon than in Washington, with virtually all of the fast/casual food places doing takeout/outdoor seating/drive-through only.

So I resorted to what seems to work fairly well which is buying at a supermarket and using the back of my bike as a table. Not a bad option.

My initial goal was to continue on the route I had planned, skipping Crater Lake due to what I suspected would be a crush of RVs, but still taking the Umpqua River through to the coast. But about half an hour on the road behind what always seemed like an endless convoy of slow-moving RVs convinced me to cut it short. I took a quick cutoff north of Chemult and got on highway 58 along the headwaters of the Willamette River to Eugene.

It was a nice ride despite the near-continuous stream of RVs and other large vehicles. This summer has seen a surge in the use of these things and it’s obvious that a lot of the people in them just don’t know what they’re doing or how to operate both safely and legally. So I slowed down. No real choice.

After Eugene, things got better heading towards the coast on a beautiful road through the mountains that eventually tracks the Siuslaw River to the coast in Florence.

Campsites are a mess too

I rode up the coast towards Yachats where I had a campsite reserved at Cape Perpetua. The campground had great reviews but I wasn’t impressed. Basically a road parallel to a creek, with parking at the side of the road and a narrow strip of grass between the road/parking and the creek. There was little to no separation between campsites unless somebody parked a vehicle to separate them, and I was the only person anywhere near me who was not in an RV.

The people on both sides were running generators, and on one side, people seem to have joined several adjacent campsites to create a large encampment with about 20 people in it, grilling something noxious while watching some game on TV.

So much for escaping to nature, let alone any semblance of social distancing.

I could not imagine wanting to stay in this place. So I started my bike and turned around. Then I slipped in the gravel and dropped the bike on it’s side. Despite the fact that there were over 20 people crammed in the next campsite watching TV, and they saw my situation, not a single one asked if I needed help. Fortunately a couple in a pickup came by and helped me right things. No damage beyond some scraped-up stickers on my left side case, but at that point I had truly had it.

I got on the road and found the first motel I could in Yachats (in retrospect, a mistake) got a room and headed out to find food.

[Reminder to self. If borders ever re-open, take another long trip to New Zealand where the biggest thing you’re likely to encounter in a campground is a mid-sized campervan and where you won’t be alone as the guy in a tent who wants some quiet.]

A nice end to the day

Pure luck led me to one of the better burgers I’ve had in a while.

Or I should say, pure luck plus the fact that I wanted to sit outside, away from crowds, in a location that wasn’t blasting awful music and where they did not insist on “infusing” every single dish with some weed byproduct.

Between the RVs on the road, the RVs in the campground, and the general crowds everywhere, I was pretty well done. Tried to get an ice cream cone but there were no flavors I wanted to try, (but I found a handful of CBD-infused ones!), and I eventually settled on a dessert in my motel room from the local food market. I finished the day reading and collapsed early.

I guess I understand why my former neighbors in LA like this place. It’s a beautiful setting and with a bit more planning would probably be a great place to just stop for a few days and relax. Some other time.