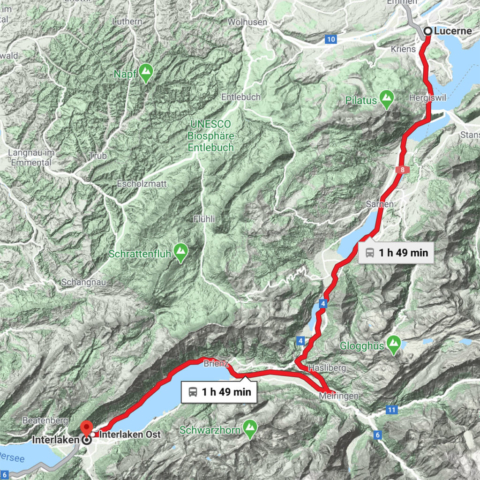 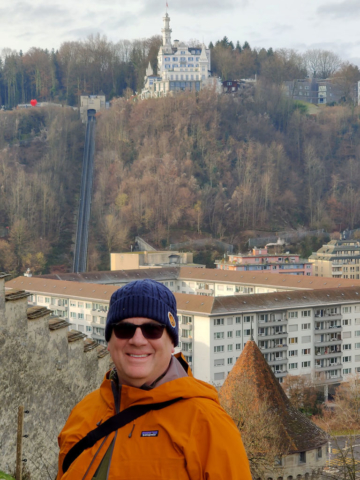 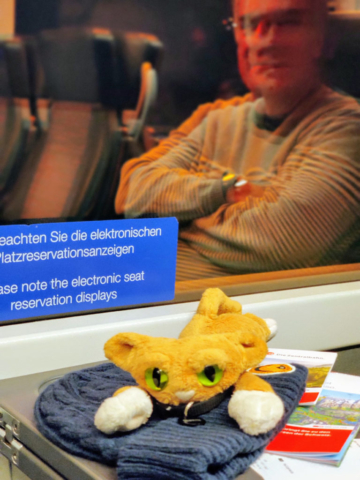 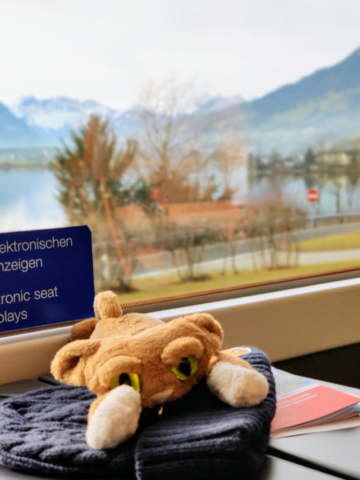 Not surprisingly, I was awake early and Jon was as well. We slept well in our very pleasant accommodations, had breakfast and decided to explore a bit before departure. The first leg of this trip isn’t that critical, with regular departures and no need for a reservation.

We walked along the lakefront, then back. It’s very low season right now: too late for anybody to still be around from holiday travel, but a bit early for the bulk of the ski and winter tourism season. Things were quiet despite the relatively nice weather.

We then looped back through town, across the river and up the hill to the ancient city wall. After walking up to the wall, then down along the wall, and finally crossing the river again, we made the decision to hurry up and get on the next train. We picked up our stuff from the hotel and headed to the train station.

The Golden Pass Line is three segments, the first of which is the Lucerne-Interlaken “Express.” It’s a fairly modern train that happens to ride on narrow-gauge rails and which is also capable of using a cog wheel for some of the steeper sections. Unlike the cog-trains that I remember from many years ago, it’s fairly quick and not even all that noticeable when you’re on the cog-wheel driven sections.

We left Lucerne southbound along the lake, then through a tunnel and on to the next lake, finally through sweeping valleys until we started climbing towards the Brunig Pass. The descent from the pass is steep, sideways along a cliff. At the bottom the train stops in Meiringen, reverses direction and heads west towards Brienz, Lake Brienz, and eventually Interlaken.

We arrived in Interlaken mid-afternoon due to our decision to leave Lucerne before lunch. Interlaken was particularly abandoned, with many places closed completely or operating at very reduced hours. After dropping things at our hotel, we struggled to find a bit to eat and made do with some pastries and pretzels at an open bakery. We also made plans for our day here.

Dinner was an unremarkable and rather bland pork chop at a Swiss place that was open even in this very low season. Most of the storefronts here seem to be watch stores. While I’m sure there is a greater than normal market for $5,000 Swiss watches in a resort town, it still seems excessive to have so many of them. There are more four-figure timepieces on display in store windows in this tiny town than in all of Manhattan or Hong Kong, which is absurd.

The other thing the Swiss seem to do to excess is cranes. They are everywhere, for seemingly the most minor construction projects. One of the main streets in the center of town had a huge crane erected in the middle, atop a massive superstructure that allowed traffic to proceed underneath. This, for what seemed to be a roofing/renovation project on an existing low-rise building.

Jon and I figure there’s quite a bit of job-creation going on here. Swatch (who own most of the Swiss watch companies besides Rolex) has been bailed out by the Swiss government more than once and there is surely a price to be paid for that in terms of lots and lots of less-than-necessary company-owned watch stores, inventory, and well-paid store staff. Crane maker Liebherr is a massive Swiss industrial employer as are other manufacturers of similar equipment. You could pay migrant workers to haul building materials up the stairs, but using expensive cranes and expensive Swiss crane operators keeps everybody happy. Like most social democracies, Switzerland is content to make rules that create well-paying jobs for the locals.

That’s not true of the hotel or restaurant staff though. While you can admire what the Swiss do for their own people, the generosity extends only so far. The staff are all from elsewhere. Even in Interlaken, you don’t have to wander far from the center of town to find the felafel and kebab joints where the immigrant/migrant staff congregate. In retrospect, we would have found a better (or at least more flavorful) dinner had we tried one of them.

Tomorrow we’ll be exploring the region by train, bus and cable-car.