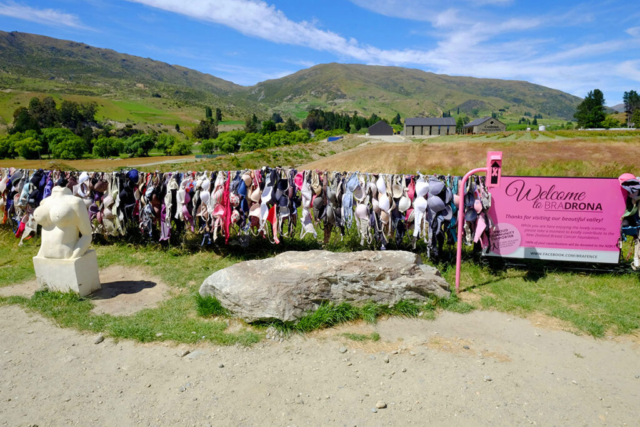 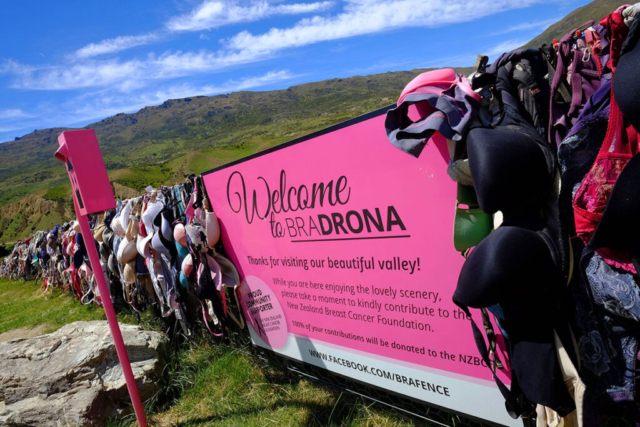 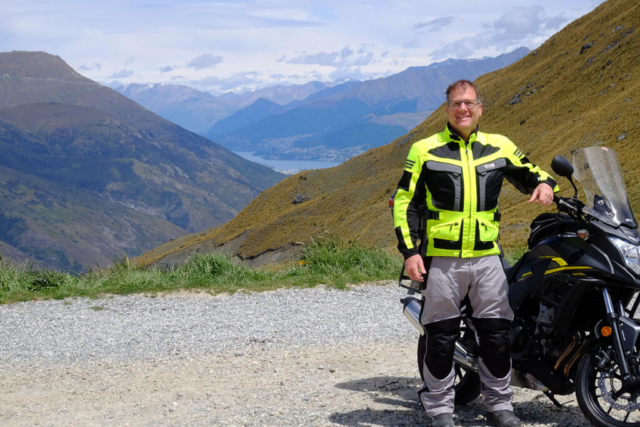 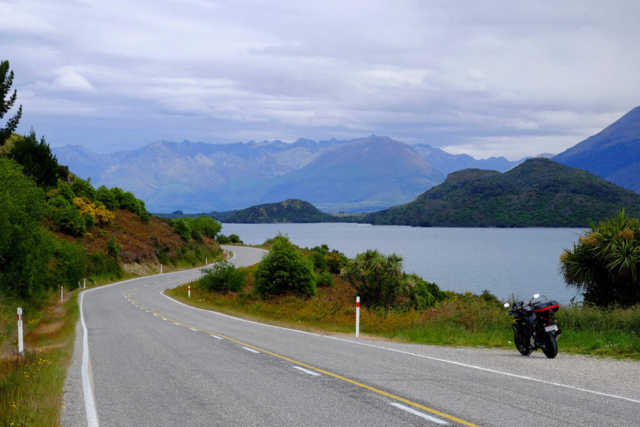 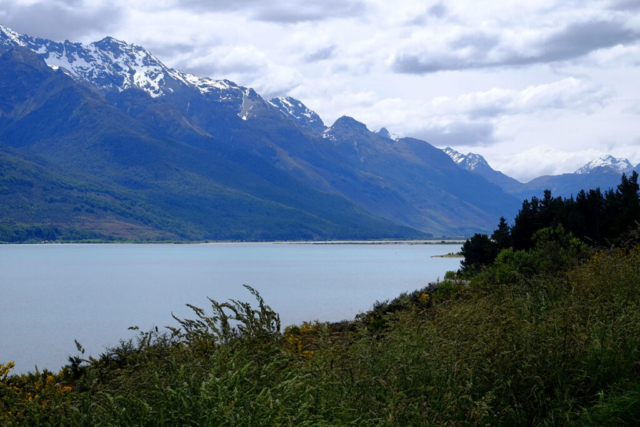 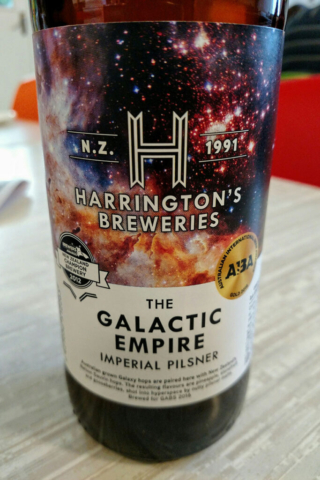 Variable weather and some good judgement

Also, thoughts about the CB500X

The day started with beautiful weather. A bit breezy early, but it calmed completely by the time we were done with breakfast. I decided that since I had planned on a few of the great New Zealand motorcycle rides, today was a good day.

The roommate wanted to try kayaking despite the threat of wind later. I had my fill of kayaking in the fiords so we parted for the day and each went after our own activities.

I rode south the way I came, going through Cardrona where I stopped to make a donation at the (in)famous bra fence, then continued up and over the pass. Today I was traveling light with only a couple of extra layers, lunch and my camera kit so the ride was much more enjoyable.

Going up to the pass from the north, it’s a nice mountain road with only a few tight curves. At the top there’s a good view towards the corner of Lake Wakatipu and Queenstown. The road down is a bit steeper and the final section is a series of seven hairpins that were much more fun going the other way.

Queenstown was everything I expected only worse. About 10km of resort development along the lake, full of hotels, boutiques, bars, restaurants, and a huge number of businesses proclaiming “adventure” in their names. Also uncountable tour buses stopping every few hundred meters to let their groups off for the next photo op, and large crowds of people in or around drinking establishments where I think some kind of sports event was on TV. It was like somebody managed to capture the worst of Park City and South Lake Tahoe, combine them, then add in the busloads of tourists you’d find in places like Yosemite on summer weekends.

[I’m told that things are worst during the last few weeks of this “shoulder” season and that many of the tiki-tourists will disappear next week only to return in April when things get cheaper again.]

Queenstown has declared itself the “Adventure Capital of the World,” and at some time in the past that might have been true, but today they use a different definition than I do. Like any good amusement park, they have perfected the illusion of adventure, but everything is choreographed and controlled so you’re rarely in a position to make a mistake that could get you hurt; you’re all-but guaranteed to return to your hotel safe, sound and perfectly on schedule. Adventure Disneyland. Not my thing. I moved on.

Lake Wakatipu is lightning-bolt shaped, with a north-south leg from Kingston at the south end (where I stopped a few days ago) to Queenstown, then a leg that runs roughly west from Queenstown and finally another north-south leg that ends where the lake is filled by two glacially-fed rivers, the Dart and the Rees. I had considered a jet-boat and kayak trip on the Dart, but weather has been cool and it didn’t seem like it would be all that much fun if I had to be bundled up the way I was on Doubtful Sound. The road to Glenorchy at the head of the lake was a recommended ride.

Glenorchy is a nice little hamlet and if I had a week to base myself somewhere and tramp around on local tracks, this would be a great place. I’ll plan for it next time.

Stopped for lunch and a hot drink, then continued up the road until I got to the Dart River bridge. There, I assessed the conditions. I could have continued on the other side of the lake where you eventually run out of road, but the weather was not looking good. The thin clouds had gotten thicker and were settling in around the mountains. I decided to head back along the lake to Queenstown, ahead of the weather approaching from the west.

After Queenstown I had planned to continue east on highway 6 through the Kawarau River Gorge to Cromwell. The gorge is the ancestral home of bungee jumping and a number of other “extreme” activities. I had come through in the opposite direction on my way to Te Anau but had not stopped. From Cromwell, I was going to continue on highway 6 to Wanaka, along the west side of “Lake” Dunstan, a large reservoir created by the Clyde Dam.

I stopped for fuel at the edge of Queenstown and put the liner in my jacket. As I left, I felt the first drop of rain. Shortly after leaving town I was forced to divert along Lake Hayes towards Arrowtown because of a bad crash that closed the main road. Re-emerging on highway 6 after some delay, I re-evaluated my plan.

The planned route would take me downhill on a twisty road through the gorge then north on straight, level roads. It would also take me well out of my way and extend the amount of time I’d be exposed to whatever weather was coming through. A nice plan for nice weather, but the weather was deteriorating. The alternative was going back over the pass to Cardrona. That would be a bit repetitive and could expose me to bad weather at a higher elevation. However it’s a nice road, I was already familiar with it, and it would be about half an hour shorter.

Also, the weather seemed clearest to the north. It’s always hard to tell in the mountains, but I’ve come to realize that the Wanaka is somewhat sheltered from weather that approaches from the south and west. I decided on the “devil I know” and headed up the seven hairpins that start the climb over the Crown Range. They really are more fun going up and much more fun with a light bike!

There was surprisingly little wind once I got off the valley floor. It was even more pleasant as I got up onto the pass where mountains provided some shelter. Turning to the north over the top, the clouds in front of me thinned out, and I could see a small patch of blue in the distance, right over Wanaka!

The forecast for the west coast remains solid rain through the weekend. We have at least one more good day here after possible rain tonight, but it’s uncertain after that. So I’m going to make the first big deletion. I’m staying here through tomorrow night and may yet get that ride through the Kawarau Gorge. Tuesday I’ll head downhill to Dunedin on the coast where the forecast is better, then north to Christchurch. I’ll check out the Skeptics In The Pub meetup on Thursday and will catch Rogue One when it opens. After that, I’ll see what can fit in the remaining time, check the forecast, and decide whether it’s time to ditch the bike for something else.

I enjoyed another improvised potluck dinner with people at the holiday park and found a timely choice in beer. Apparently, small breweries in New Zealand are far enough away from Disney IP lawyers to get away with such things.

Some thoughts about the 500X

I’ve been really happy with the 500X. Fully loaded it can be a bit sluggish in tighter turns, but is predictable and still fun. The higher windscreen (Givi) that Motorent put on the bike kept much of the rain off me when I had to ride in it, though for a person of my height it also directs  quite a bit of turbulence directly at my face visor.

Riding today with almost no weight on the bike was a real pleasure. The sluggishness I’ve experienced when carrying luggage is gone. It handles tightly and predictably. Maybe not “exciting” but nice. The engine is flexible and doesn’t demand much shifting on these roads. For most of today’s ride I moved back and forth between 3rd and 4th. On faster roads, it purrs along in 6th, requiring only infrequent downshifts for slower curvy sections. Brakes are adequate with full luggage and more than adequate when it’s just me. I haven’t triggered the ABS system once that I’ve noticed.

Fuel consumption is exceptional. At approximately $5 (US) a gallon, that was one of my considerations in choosing this relatively small Honda over some larger bikes.

I suspect that it would not fare quite as well in the US, especially when fully loaded. Our highway speeds and the altitudes we commonly encounter in western mountains demand more than this bike can optimally deliver, though you could certainly make it work for shorter trips or in any area that does not include high mountains. It would also help a lot if you were smaller than me. So far though, it’s just fine on NZ’s two-lane roads with elevations that top out at 1076m.